Reverse dieting – saving your metabolism or a road to disordered eating?

So I’ve seen a lot of people hitting reverse diets now that they’re beginning to come out of shows, and with the season almost drawing to a close, with lots of competitors coming off prep and lots of non-competitors having starved themselves through beach season, I thought it was a prime time to get my thoughts out there about the concept of reverse dieting.
Reverse dieting – what is it?

Most people have heard of reverse dieting by now. But for those that don’t know what it means, reverse dieting refers to the process of slowly increasing calories following a prolonged period of low calories (such as a competition prep), when metabolic rate is slightly lower (mostly due to a lower body size). Lots of competitors do this following a competition, but others who have tried to diet for months and/or years on consistently low calories may also aim to reverse diet their way back to a higher maintenance of calories again. The overall aim of reverse dieting is to achieve a relatively higher maintenance intake, so that the individual can eat more food  and/or undertake less cardio, on a daily basis. Long-term, this should allow the person to diet down again, without having to diet on such low calories as before.

Does it work?
There are lots of ways to judge whether a reverse diet has been successful or not, some better than others. For me, there are 2 main outcomes:
– Does the person have a better relationship with food?
– Can the person eat a more comfortable and sustainable amount of food without excessive fat gain, compared with dieting?

How do you define success of a reverse diet? You might slowly gain a little muscle, a little fat, and on the outside, avoid a huge ‘rebound’ that we see so frequently in competitors and in those who have undergone a strict calorie restricted diet (Juice diets anyone?). But what about what we don’t see? Those people, they may appear to have found themselves back in a comfortable place, after following a slow reverse, training hard and increasing their calorie intake. But in my experience, and from reading around the area, most people that reverse diet, fail. And I don’t mean that they fail to hit a maintenance without unnecessary weight gain, I mean they fail because mentally, they are in serious trouble. These people tend to be binging behind closed doors. Because they are hungry and goalless. Those people who never had trouble with food before, or perhaps did, and that’s why they found the dieting/tracked intake life in the first place, are now stuck in a binge-starve cycle. Some may develop bulimia. Sound extreme? Absolutely. But unfortunately, it is all too common.

Reverse dieting and your relationship with food

“Post-show is so much harder for me than prep”
“I find it much harder to diet without a short-term goal in sight”
“Bad day with food yesterday, but back on the reverse diet today”
The amount of times that I’ve read this, been told this, or in fact even experienced this myself, is ridiculous. Sticking to a diet is ‘easy’ when you’ve got to step on stage in a number of weeks, in front of people, in a bikini, or when you’ve got a beach holiday coming up and loads of photos to take and confidence to find. But what happens when this is all over, and at least for the short-term, you don’t have a reason to diet anymore? Oh, and you’re really pretty damn hungry after being on lower calories than normal for so long.
Now, imagine you’re still trying to diet, despite wearing your frumpiest winter clothes (FYI the feed the birds lady from Home Alone 2 is my Doppelganger), not having anyone see your naked body for the forseeable (your boyfriend and/or girlfriend is just happy to have your personality back), and being hungrier than those people from Bear Grylls Island when all they’ve eaten is one fish between 10 in the past 3 days. Add in to that the complete free reign of anything and everything your food deprived mind ever dreamed of (I have genuinely had love dreams about cake in my leanest of days). Now, imagine that I’m telling you to consume only slightly more calories than you did when you were 3 weeks out from that show / beach holiday. Chances of you sticking to it 24/7? Slim to none. And you know why? Because you’re not a robot.
Dieters have been so focused on one end goal for so long, that they don’t know how to deal with it when it’s all over. I’ve touched on this in a previous blog about maintaining a coach following a show, rather than ditching them as soon as you’re done. But that feeling of being goalless, the anti-climax of a show or a holiday, leaves people trying to maintain a level of lean that isn’t maintainable long-term. Reverse dieting to try and maintain a low level of body fat, whilst consuming more food, can leave people feeling all sorts of confused and frustrated.
Metabolic damage – does it exist?

You’ve probably heard people say they have ‘metabolic damage’ after some silly coach put them on an excessively low calorie intake, then they gained loads of weight and said they must have metabolic damage. Or, they’re still on an excessively low intake but just can’t lose weight. The term ‘metabolic damage’ is used to describe the phenomenon that after eating under maintenance calories for a prolonged period, you’ll undergo negative metabolic changes that will lead to a lower resting energy expenditure, even after you’ve gained weight back that you have lost i.e. you will have to consume less calories at the same weight, in order to maintain that weight.

Any change in your metabolic rate is in line with body composition. You know those people who look lean and muscular and can put the food away, the bottomless pit people? Lean body mass has the biggest effect on your metabolic rate. That’s why weight lifting, and improving your muscle mass, is so useful when you’re trying to reduce your body fat.

Lots of research has looked at the phenomenon of metabolic damage, and whether it does even exist. Years and years ago, some crazy people volunteered to starve themselves for 6 months (way harder than a bikini prep I can imagine) as part of the Minnesota starvation experiment. They were then refed and regained their body weight, and alas, there was no reduction in their metabolic rate. You’ll see something similar in anorexia patients – they don’t have any reduction in metabolic rate once recovered. Yes, if you’re lighter and have a lower fat and lean muscle mass, of course your metabolic rate is slower, you have less of the body mass that determines metabolic rate. Put this back on, and it appears your metabolic rate will reestablish itself.

What can happen though, is that if you stay in a super lean state for a long time, this reduction in metabolic rate goes further than just being lower due to lower body mass (adaptive thermogenesis). Hence one of the reasons why you don’t want to stay crazy lean year-round (and it’s also cold. And boring. And your ass is small).

Reverse dieting vs. an immediate return to maintainance
There are people that use ‘reverse dieting’ as a throw away phrase, a phrase of disgust alongside ‘flexible dieting’ (you know the type that swear IIFYM is an excuse for lazy people to eat pop tarts every day), who might go straight back up to maintenance calories after prep, or even a surplus in calories, to ‘make the most of the rebound’ and/or get the most out of their limited time of growth of an off-season. And that’s ok too…

What if you haven’t competed?
Lots of people come to me maintaining body composition on a relatively low calorie intake. These people don’t necessarily care about making the most of the next 6 months and optimising the potential for muscle mass gain. They don’t want to gain unnecessary fat. In these situations, reverse dieting might be a great alternative to whacking them in a calorie surplus and increasing fat mass. These people don’t want excessive fat gain, they want the opposite. Trying to convince people, who see quick fix generic low calorie plans as an effective way to quickly solve their problems, that what they actually should do is gain weight, is a tricky one. Reverse dieting allows slow and steady progress in terms of lean body mass, fat mass and metabolic rate. This not only helps compliance to the nutrition programme, but also ensures the best mental state of the person (some people can’t cope with fat gain and see this as failing on their short term goals).
What should you do?

What this usually means, is that you start with a more drastic increase in intake back to maintenance after prep (but still maintenance calories as calculated for your now lower body weight), then following this you increase more slowly. Doing this will allow you to maximise your potential for muscle hypertrophy in your limited off season period (a much slower reverse will simply limit your time for growth – focus on your long term goals here).

Now that I’ve decided to take a break from competing, my goals are to gain some muscle mass without gaining huge amounts of fat (I want some, I miss my booty). I also don’t want to track, but for me, I’m aware of the macros in most of my foods, inadvertently. So for me, a slow reverse diet is appropriate. I’ve bumped my calories up to just below maintenance since coming off prep, for me a sustainable amount without making me so hungry that I end up binging (I’ve spoken about this before). I’m roughly aware of my calorie intake, but without tracking I can’t be sure. I’ve done this without my fitness pal daily tracking (I plan to write my next blog on learning to move away from tracking every meal), and without binging 95% of the time. I plan to conservatively increase this intake and remain in a slight surplus in calories, to allow some lean body mass increases (and yes, a little fat). This works for me. I’ve tried a strict tracked reverse diet, and I avoided fat gain, but also minimised muscle gains in my previous off seasons and it took months to make a full week without binging. This has been the fastest that I have ever recovered after competing, so for me, I can judge this to be the most successful ‘post-diet diet’ yet… 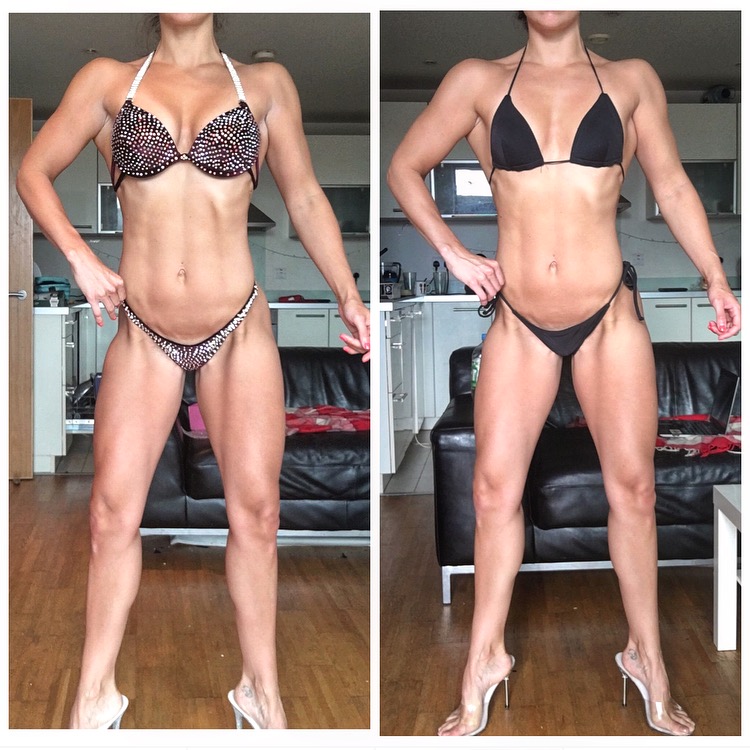 6 weeks out of Arnolds on the left, the day before coming off competition prep.
2 weeks later, 2 weeks of intuitive eating and increased calories on the right.
As with all nutrition, this process needs to be super individualised. I work with my clients to determine exactly what their short- and long-term goals are, what fat loss and gain they are comfortable with, and what their relationship with food is currently like. Know yourself, know your triggers and know what you, yourself, are happy with. What are your priorities? Only you can decide this…