Today I analysed a nut over dinner for a good 5 minutes. Should I eat the nut? I’m having a starter and a main, and there’s a chance I’ll have some cheese too. It’s only one nut. But do I need it? Is it hunger or greed? I’m potentially stepping on stage in a bikini in 7 weeks. That nut might derail me and lead to additional nuts. And maybe more. But I’m on holiday and I want to relax so I’ll eat the nut. But is it worth it?
The above scenario sounds ridiculous, but it’s a genuine debate I had with myself whilst having a family dinner in the south of France. And I can absolutely guarantee that it’s a debate similar to those had across many a competitors table during competing season. It’s embarrassing to admit, and it makes me sound like a sad crazy person, but it’s an insight in to the mind of a competitors, trust me.

I’m a bikini competitor, which is a form of bodybuilding, but most probably at it’s ‘lightest’ end. Prep for a bodybuilding competition is something that, from the outside, looks like a simple diet down to make a decently shaped body in to an awesomely shaped lean body. It’s up to 4 months of tracking macros, generally a structured meal plan and consistent training. And voila, a lean sculpted and tanned physique is made.

If you don’t compete, that’s the stuff that you might already be aware of. From a competitors view, prep is so much more. Alongside the additional cardio to do (that ups our training to a minimum of twice per day) and less food, you can expect to experience extreme hunger, loss of strength, super tiredness, a massive dent in your bank balance and the feeling of being drained, physically and mentally, most of the time as you get closer to the show. Oh, and sometimes you become a delightfully irritable character, and maybe a little paranoid, and crazy (yes that tweet from someone who has never met you and has no idea who you are is is definitely indirectly at you). That being said, I have always fought to hide these feelings and focus on the positives, and like most people who love competing, can ignore them and genuinely love the process. I mean, I have abs, people admire my dedication, I actually look like an athlete instead of a soft ass who lifts the odd weight. More importantly, after losing some of my life in prepping for my first show, since then I have always made prep a part of my life, instead of my whole life. After all, the people who love you really don’t care that you’re hungry, as long as you’re happy. And they certainly don’t care if you’re miserable, after all, you chose this life. However, don’t be fooled, a competitor on prep can have a mind darker than voldermorts if you catch them at a bad time.

I’ve gone through about 14 months of dieting for shows in total since I started competing and the process has always fascinated me. What it does to my body, my mind, what I can manipulate to improve all of these things. That right there, that’s a scientists dream. Although in the real world, if you tried to put a subject through a competition prep as a trial, I can guarantee ethical approval would be somewhat of a challenge…
However, since undertaking 4 months of prep this year and competing in two shows, back to back within 9 days of each other and qualifying to compete internationally at the Arnold classic and at British finals, something has changed in my mind. I’ve been writing this blog for the past 5 weeks, as I try to recover my mind from a relatively dark place, back to the place where I am happy and strong and in love with the sport, and below are some of my realisations.
I share a lot of my journey on social media, and am constantly told by girls how they appreciate my honest approach to the whole process. Feel good? I’ll say it. Feel like a weak ass? I’ll shout about it. But some things, some things are never really appropriate for social media (despite what some oversharers have you believe).
So. A few home truths. What you don’t see is that for 10 weeks during this prep, I didn’t make it to bed with my boyfriend because I was so hungry I took myself off to bed before he even made it home from work (he finishes at 9pm). Yes that means a distinct lack of spooning, and forking? Well that’s a whole other ball game. When you get super lean, chances are your periods will stop. Periods happen because of hormones, which means your hormones are also all over the place and it can take months, if not years to get your hormones back on track.
What you also don’t see, is the 8am struggle of not making your 5am cardio slot, and the subsequent shouting at my boyfriend for being too slow so now I’m too hungry and cardio will leave me a shaky mess. You don’t see the watching of the clock in a countdown to the next meal, 2 minutes after eating the last. And again, this is some sort of cheap thrill when you’re competing and I actually, deep down, love that feeling. But is that normal and/or healthy? Arriving back from my holiday recently, I decided after much internal debate to have a complete rest day. That meant no cardio and no lifting, even though I was ordering a big meal of burgers for dinner (and I mean big). Suddenly it dawned on me, it had been months if not years since my last complete rest day. In fact I couldn’t remember when.

I have always prided myself on keeping that all important ‘balance’, eating out despite being on prep and just making smart choices, eating family meals and enjoying the social side that comes with food. I firmly believe that if you can’t make competing part of your life, as opposed to your whole life, then it really isn’t the sport for you. But don’t be fooled, regardless of how much of a life you maintain, you will still be making sacrifices and you will have to make these daily, because that’s the whole point of prep. Just because you see a competitor eating out, that doesn’t mean she hasn’t macro hoarded to allow it, or done some additional cardio, or tracked every single mouthful.

But you know what? I miss dating. I miss going for dinner with my partner and not HAVING to have pizza, because I don’t know when I’ll get to eat it again. I miss going away for weekends and not having to bring a suitcase of meals. 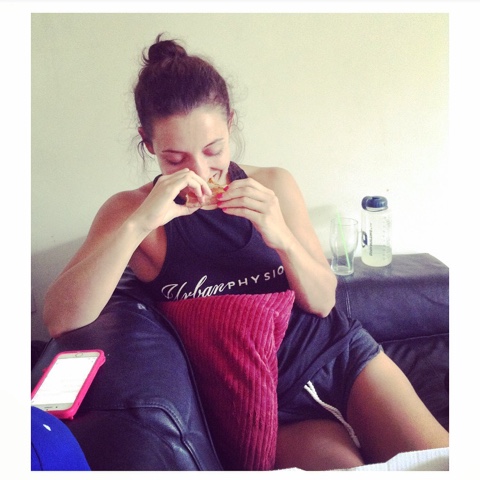 Current situation. Just one slice of pizza and I said to my boyfriend “this is the first time in ages that I haven’t had to go and train that off”. Relief. Happy tears.